TTR In The Press

The technology sector continues to reign supreme in M&As, private equity, venture capital and asset acquisition operations in Brazil, with 640 transactions in January-September, according to a new report by M&A research firm Transactional Track Record (TTR).

With a jump of 83% year-on-year, the segment accounted for nearly 40% of all such transactions recorded in the period.

In Q3, 699 transactions were recorded in Brazil, including 243 in the technology sector, for total reported value of 105bn reais. According to TTR, Q3 was the most active quarter of the last eight in number of transactions.

The US and the UK, with 154 and 28 transactions, respectively, were the countries that most invested in Brazil in the period, according to the report.

Conversely, Brazilian companies chose the US as their main investment destination, with 38 transactions, followed by Colombia (12) and Argentina (11).

The number of VC transactions rose 64% year-on-year in Brazil, with a reported value of 45.4bn reais, an increase of 237%, TTR said.

There were 510 venture capital deals, 168 asset acquisitions and 93 private equity transactions year to date, according to TTR.

Such active VC and private equity movement reflects the overall booming tech scene experienced not only by Brazil, but also by other Latin American countries recently.

In 2020, US$4.1bn in VC investment flowed into the region, more than the US$3.3bn that went to Southeast Asia.

It was also more than what flowed into Africa, the Middle East and Central and Eastern Europe combined,

Preliminary data from the Latin America Private Equity and VC Association (Lavca) shows that VC investment in the region hit US$5.08bn in Q3, about four times that in Q3 last year.

In the first nine months of 2021, according to Lavca, the region received over US$11bn in VC investment, more than the total of 2020 and 2019 combined. 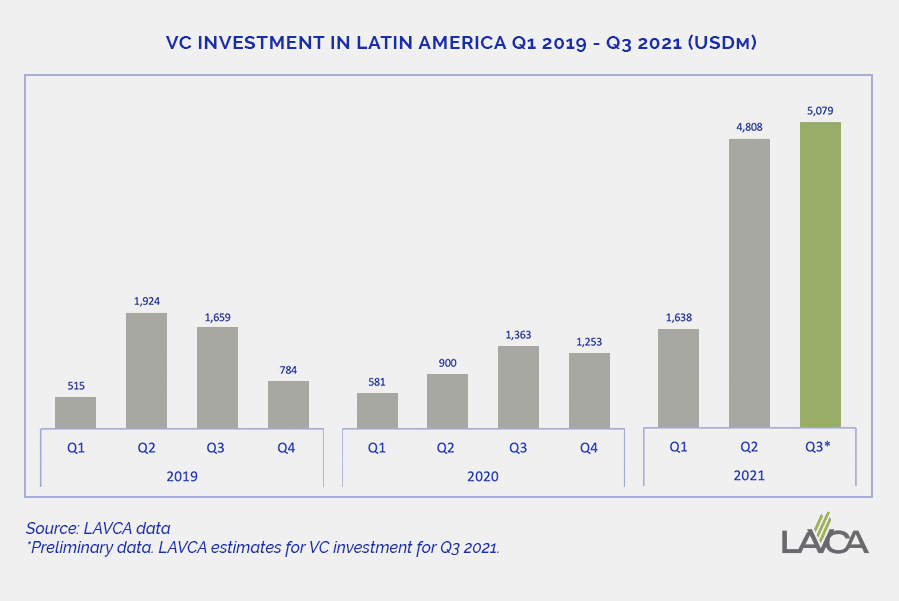 The largest VC player in the region dedicated to technology is Argentina’s Kaszek Ventures.

Since 2011, Kaszek has backed 96 companies, mostly from Brazil, and helped create 11 unicorns.

The early-stage VC firm has to date invested in companies headquartered in Argentina, Brazil, Chile, Colombia, Ecuador, Mexico and Uruguay, aside from the US.

Among the unicorns it helped forge are Brazil's Nubank, QuintoAndar, Gympass and Creditas, Mexico's Kavak and Uruguay's PedidosYa.

The firm was founded by MercadoLibre co-founder Hernán Kazah and the company’s ex-CFO Nicolas Szekasy.

Building up on this longtime connection, Kaszek and MercadoLibre announced this month they were teaming up to create a special purpose acquisition company (SPAC).